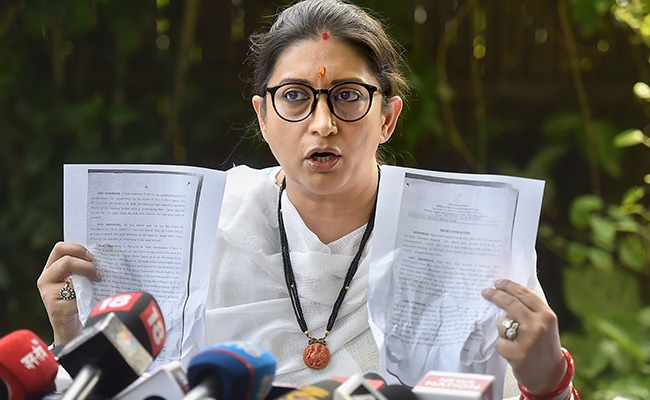 The High Court said if the Congress leaders failed to remove their tweets, Twitter would have to do so.

The judge said “grave injury had been caused to the reputation of the plaintiff” with the tweets. “I am of the prima facie view that slanderous allegations were made against the plaintiff without verifying actual facts,” said Justice Mini Pushkarna.

Jairam Ramesh confirmed the summons in a tweet. “The Delhi High Court has issued notice asking us to formally reply to the case filed by Smriti Irani. We look forward to presenting the facts before the court. We will challenge and disprove the spin being put out by Ms. Irani,” the Congress MP tweeted.

The Delhi High Court has issued notice asking us to formally reply to the case filed by Smriti Irani. We look forward to presenting the facts before the court. We will challenge and disprove the spin being put out by Ms. Irani.

Union Minister Kiren Rijiju, in a swipe at the Congress, tweeted: “One must verify all the facts before leveling defamatory charges against persons holding high positions or any citizen.”

One must verify all the facts before leveling defamatory charges against persons holding high positions or any citizen. pic.twitter.com/swa4dgvBPT

Smriti Irani had been targeted by the Congress with allegations that her 18-year-old daughter is running an “illegal bar” in Goa.

The Union Minister last week sent a legal notice to the three Congress leaders and their party. She sought a written unconditional apology and the withdrawal of allegations against her daughter immediately.

Ms Irani accused the Congress of “assassinating and publicly mutilating” her daughter’s character and dared the opposition party to produce proof of any wrongdoing. She asserted her daughter is a first-year college student and does not run any bar. The three Congress leaders had “conspired with other unknown individuals to launch a series of scathing and belligerent personal remarks to malign and defame a young child of the plaintiff who doesn’t even live in the country,” she said in her lawsuit.

The Congress had, during a press conference, shared a copy of what it said was a show cause notice served to a restaurant operated by the minister’s daughter. Pawan Khera, party spokesperson, had claimed that the license for the bar was taken in the name of a person who had been dead for over a year.

Narayan Gad, Excise Commissioner of Goa, on July 21 issued a show-cause notice to the restaurant on a complaint from lawyer-activist Aires Rodrigues, who alleged that the owners had submitted “fraudulent and fabricated documents” to get the licence.