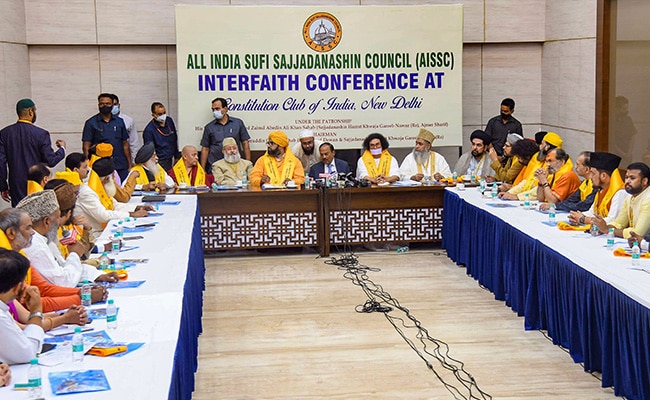 National Security Adviser Ajit Doval today warned the nation to be on guard against forces conspiring to disturb harmony and create unrest in the name of religion and ideology.

Mr Doval made the comment at an event organised by the All India Sufi Sajjadanashin Council in Delhi, where religious heads attended to discuss and pass a resolution for peace and unity. A resolution after the meeting called for banning organisations like the Popular Front of India, or PFI, “who have been pursuing a divisive agenda.”

“Some elements are trying to create an atmosphere that’s vitiating the progress of India. They are creating acrimony and conflict in the name of religion and ideology, and it’s affecting the entire country while spilling over outside the country too,” Mr Doval said.

The National Security Adviser’s warning comes two months after a now suspended BJP spokesperson, Nupur Sharma, made comments on the Prophet Muhammad on TV, which led to condemnation from Gulf nations, followed by India’s assurance that it does not tolerate comments such as the one made by “fringe elements”.

A Hindu tailor was then killed by two Muslim men on camera in Rajasthan’s Udaipur. The comment by Ms Sharma also led to clashes in some parts of the country.

In a statement after the event, the organisers said, “…The nation is going through tough times because of certain anti-social elements and groups who are trying to distort the image of India as a shining example of unity in diversity.”

Among the eight-point resolution on the meeting released to the media, one of the points called for banning the Popular Front of India, or PFI. This resolution is significant since the National Security Adviser had attended the event and the resolution is for all purposes a joint stand.

“Organisations like PFI (Popular Front of India) and any other such fronts, who have been indulging in anti-national activities, pursuing a divisive agenda and creating discord amongst our citizens must be banned and action initiated against them as per law of the land. At the same time, we strongly recommend that any person or organisation found guilty with evidence of spreading hatred among the communities through any means must be acted upon as per the provisions of law,” the resolution said.