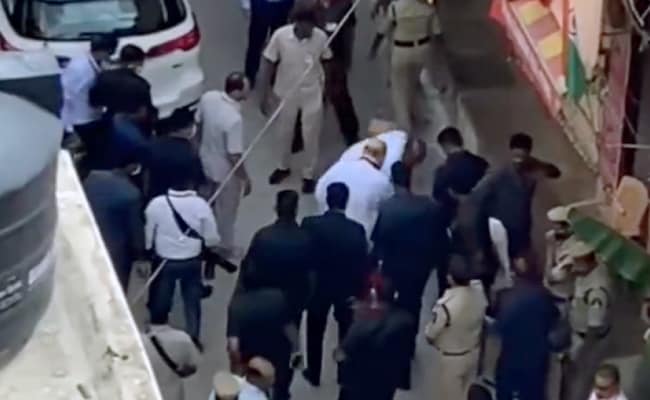 The Telangana Rashtra Samithi (TRS) has launched a fierce attack on the BJP over a viral video in which Telangana BJP chief Bandi Sanjay Kumar fetching the sandals of Union Home Minister Amit Shah when the latter was visiting a temple in the state.

Making a pitch for “Telangana pride”, he has tweeted the video and said that the people of the state are watching the “slaves of Gujarat” and will reverse any attempt to denigrate Telangana’s “self-respect”. He used the hashtag “#TelanganaPride”.

Gulamgiri at its best 👇 pic.twitter.com/W1yXFI6zVZ

The BJP is yet to respond to the TRS attack over the video shot outside the Ujjaini Mahakali Matha Devasthanam in Secunderabad.

Mr Shah’s visit to Telangana comes in the run-up to the bypolls to the Munugode Assembly seat in Nalgonda district.

Launching a no holds barred attack, Mr Shah yesterday accused the TRS government of betraying the trust of the people of the state.

“KCR is denying PM Fasal Beema Yojana to the farmers of the state. He has committed the sin of keeping the farmers away from the Insurance. The KCR government is anti-farmers,” he added.

Accusing KCR of pushing dynastic politics, he said, “They had promised to make Chief Minister from the Dalit community if their government is formed. They have not done so far. If you elect them again, KTR will come in place of KCR, but Dalit won’t come.”

Mr Shah said Telangana is “yearning for change”. People are all set to elect the pro-poor and pro-development BJP government under the guidance of PM @narendramodi Ji,” he tweeted.

KTR hit back, saying that Mr Shah’s “anti-farmer” jibe at KCR is the “joke of the century”. Countering the dynastic politics attack, the minister took a swipe at Mr Shah’s son Jay Shah who is now the secretary of the Board of Control for Cricket in India.

And he will lecture & enlighten us on Parivarvad 👏🤦‍♂️

The Home Minister’s attack on KCR comes in the wake of the TRS chief’s push for a national role ahead of the 2024 general election. Targeting the Prime Minister, KCR said that he “dressed for elections” and called on the people to “throw BJP into Bay of Bengal”.

Earlier this month, he skipped a meeting with Prime Minister Modi and called the Niti Aayog “useless”.